Following the big changes to the Canadian Foreign Worker Program, the month of August, 2014 saw a drop by nearly three quarters on the same month in 2012 in the number of applications made to hire temporary foreign workers.

Speaking during Question Period in the House of Commons in Ottawa, Employment Minister Jason Kenney stated that “We announced a fundamental sweep of reforms to the Temporary Foreign Worker Program earlier this year to ensure that it is used as a last and limited resort and that Canadians always come first in the workforce.

“Since those reforms were announced we’ve seen a 75-per-cent reduction in the number of applications in temporary foreign workers on the part of employers,” added Mr. Kenney, who used to hold the Citizenship and Immigration portfolio within the Government of Canada.

New rules for hiring temporary foreign workers introduced in June make it more difficult for employers to hire internationally, requiring them to meet strict criteria to ensure Canadians are first in line for jobs. It has also seen a large increase in the application fee, from 0 to $1000 per application for every employee.

Statistics Canada, the federal agency assigned to produce statistics to better understand Canada, has released its latest population projections. It is projected that immigration will heavily influence the makeup of the country over the coming decades.

Alberta, for example, will most likely overtake British Columbia as the third most populace province by 2038, reaching between 5.6 million and 6.8 million. Its current population is just over 4 million. A young workforce attracted to the province by a strong economy will result in Alberta continuing to have the lowest proportion of seniors in the country. 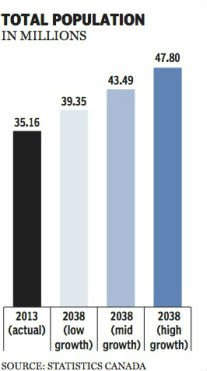 Most scenarios show Newfoundland and Labrador, Nova Scotia and New Brunswick all losing population over the next 25 years. This is due to their relatively older age structure, their small share of Canadian immigration, and the tendency of many younger members of their Canadian-born populations to seek work in other provinces.

The overall population of Canada is projected to be between 39 million and 48 million by 2038.